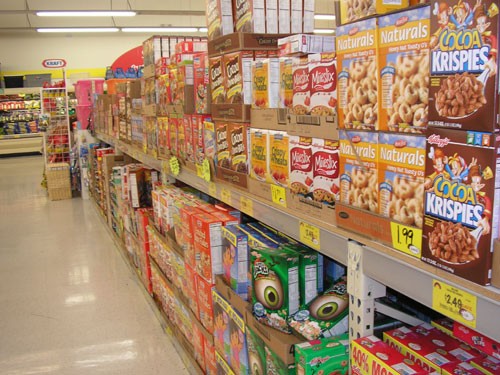 Have you ever stopped to think that America is turning into one big gigantic feedlot–but WE are the cattle?

The American public is now living on a diet that consists mostly of corn, wheat, and soy products, very very similar to commercially raised cattle, chickens, and fish.

These industrialized big business agricultural products have been pushed into our food supply in thousands of insidious ways.

Starting with the thousands of packaged, processed items available at the grocery store, all the way back to the feed for commercially raised meats–it seems that corn, wheat and soy are on the ingredient list in some form if you look long enough.

Our diet is way out of whack.

At least a third or more of your local supermarket’s 45,000 or so ingredients have corn, wheat or soy products or their derivatives in them.

The tricky part is the derivatives do not always say they come from corn, wheat or soy.

The biggest offender is corn.

Corn is THE most abundant grain produced in America by far!

There is the ever-present high fructose corn syrup, cornstarch, corn flour, corn bran, dextrose, and much less obvious– leavenings and lecithin, mono-, di-, and triglycerides, the golden coloring added to foods, and even citric acid can all be derived from corn and corn bi-products.

Corn is milled, refined and restructured, and can become an amazing number of things, from ethanol for the gas tank to dozens of edible and not-so-edible food products.

Consider the thickeners in milkshakes, hydrogenated oil in margarine, modified cornstarch that binds the unrecognizeable meat in a chicken McNugget.

And then there is the unavoidable sweetener, high-fructose corn syrup (HFCS).

This sneaky sweetener has invaded every nook and cranny of the food system.

Sadly, the commercial food industry has done a great job convincing the public that those 45,000 different items in the grocery store are real variety in food instead of clever rearrangements of the same basic ingredients with come chemical flavorings and food coloring to make it all different.

We have unknowingly become trapped in our own feedlots, and now are becoming a country of obese, sick  and apathetic people who care nothing about nutritional quality and the source of our food—simply because, “It tastes good.”

Unfortunately this very dysfunctional food system has also supersized appetites and created food addictions for the sweet and starchy artificially flavored ‘food’ creating big dollars for food companies in spite of the serious cost to our health and well-being.

And in America, most all conventionally raised meat can be traced back to corn: turkeys, chickens, pigs, and even cows (which would be far healthier and happier eating grass) are forced into eating corn.

Even our farmed fish supply is now becoming corn-fed, like the carnivorous salmon.

All of these grain raised meat then lose their natural nutrition and become full  of unhealthy, disease-causing fats.

There is a way to see exactly how much of your diet is from corn:

Corn has a very specific carbon structure which can be traced in any animal that consumes it.

If you compared a hair sample from an average American and a Mexican who eats a diet high in corn, you would be shocked to learn that the American would have a much larger amount of corn-type carbon in their system.

Todd Dawson, a plant biologist at the University of California-Berkeley says, “We are what we eat with respect to carbon, for sure. So if we eat a particular kind of food, and it has a particular kind of carbon in it, that’s recorded in us, in our tissues, in our hair, in our fingernails, in the muscles,” Dawson says.

In most Americans, the carbon test shows that about 70% comes from corn!!

“North Americans are like corn chips with legs,” says one of the researchers who conducts such tests.

So exactly what is wrong with eating such a corn-rich diet?

The base of the food pyramid is GRAIN–isn’t that what we’ve been told is healthy?

We are what we eat, but there is plenty of  evidence that this grain-heavy way of eating not only spreads illness, but waste, and ecological devastation around the world.

The other big problem with corn and a grain based diet, is that the average American diet consists of food products heavy in Omega 6. An average ratio would be about 25:1 of omega 6 to omega 3.

However, nutritional scientists state that mostchronic diseases start occurring and are detectable when the omega 6:3 ratio exceeds 4:1.

And, the optimum ratio, seems to hover around 1:1 which is the ratio found in grass-fed animals.

Since all grains have high omega 6 to omega 3 ratios, it’s obvious to see that a grain-based food system creates a serious omega 3 deficiency!

All the way back in 70’s scientists knew that grain-based foods, and grain-fed livestock products were one of the primary causes many of today’s big chronic diseases such as:  Cancer, heart disease, depression, ADD, Alzheimer’s, obesity, allergies, and autoimmune diseases such as lupus and arthritis, diabetes, asthma, and more.

Obviously, to win the battle against all these diseases, we are going to have to make major changes to our diets, and no one food product can solve the problem by itself.

Primitive man lived on a diet of greens, vegetables, some tart fruits, some nuts, and mostly meat–all grass fed and naturally raised of course.

That way of eating is often referred to as the Paleo diet, the Hunter Gatherer diet, or the Cavemen diet.

Here is a thought: Corn has the ability to fatten up a beef steer much faster than pasture-grazing does–although it makes the cattle themselves unhealthy and sick as well.

Cattle that have spent four to six months in a feedlot eating grain, have four to six times more fat, twice as much saturated fat, and as little as 1/10 the quantity of omega 3 fatty acids compared to meat from grass-fed cattle.

Of course, this does create big, fat cattle that grow in about half the time as grass fed, the cattle become as sick or sicker than we humans from eating corn and grain.

Corn and grain do not agree with cow’s sensitive systems and cattle get GERD, ulcers, and other serious digestive issues. Another big issue with corn is that it is also very low in calcium and can lead to broken bones in the cattle.  Farmers then add soybean meal and it makes the problem worse!  The calves grow way too fast with the extra protein and end up with even weaker bones.

I don’t know about you, but I am beginning to draw some parallells here… Is it any wonder that we, as people have so many cases of osteoporosis, GERD, ulcers, and digestive issues?

Do we want to follow in their ‘hoof’ steps?

Slowly but surely many of us are. Are we turning into a national feedlot of people?

Let’s not be cattle but humans  who can think and who want to be healthy, strong and lean like our primitive ancestors.

Let’s be individuals in our dietary choices and make the decision to not follow the herd. The Fat Burning Kitchen Program will show you how to eat well, avoid grain, have effortless weight loss, and exceptional good health.

Till next time, stay healthy and lean!