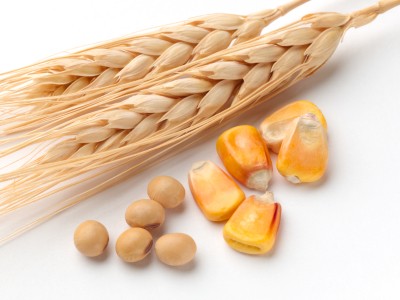 But our country has been steadily increasing its consumption of grain for the past 30 or more years. Along with that are the rising numbers of obese and overweight people.

In the 1970’s, the average American ate 85 pounds of flour, 84 pounds of sweeteners, 8 pounds of fried potatoes, and 39 pounds of cooking oil.

Even then, not so good.

Fast forward to the nineties…

By 1997, each of us was consuming 122 pounds of flour, 105 pounds of sugar or other sweeteners, 20 pounds of fried potatoes, and 50 pounds of vegetable cooking oils.

That’s almost a pound of knowingly bad-for-you foods per day!

And that doesn’t count a whole lot of other junk food…but clearly, the reason many are overweight or obese today. And today, flours are more refined than ever, missing fiber  and essential nutrients. Processed white flour (alias “enriched wheat flour” or “wheat flour”) is missing the two most nutritious and fiber-rich parts of the seed: the outside bran layer and the germ (embryo).

The more refined foods a person eats, the more insulin must be produced to manage it. This leads to insulin resistance, type 2 diabetes, and weight gain. The refined carbohydrates turn to glucose very quickly once in our systems, stimulating the body to produce insulin.

“Enriched flour,”  is very misleading, because only four vitamins and minerals are typically added back, compared to the 15 nutrients and essential parts of the grain that are removed, along with most of the fiber and other beneficial substances such as antioxidants that are removed.

Eating wheat can cause one to feel lethargic, foggy, groggy, puffy and bloated, irritable and depressed.

Many would never connect these symptoms with eating grains; but weight gain, emotional, physical, and mental symptoms are fairly frequent with gluten sensitivity.

Gluten is the protein portion of wheat, rye and barley. It is so widespread in standard processed food today; it is very hard to escape. Unfortunately gluten sensitivity is on the rise (notice the “gluten free” sections at the grocery store?) and it can cause a host of problems.

The American food supply is also heavily based on corn.

Bumper crops of corn help to keep corn prices low which in turn helps to keep many of the items we buy at the store low-priced. Contrary to popular belief, corn is a grain, not a vegetable, and is really not appropriate as a dietary staple for several reasons—one of them being that corn has a high sugar content.

When civilizations such as the Mayans and Native Americans changed their diet to a corn-based one, rates of anemia, arthritis, rickets, and osteoporosis skyrocketed.

Our bodies were not made to exist on grain-based foods. This evidence shows up in the archeological records of our ancestors. When archaeologists looked at skeletons of native Americans in burial mounds in the Midwest who ate corn as their primary staple, there was a 50% increase in malnutrition, four times as much incidence of iron-deficiency, and three times as much infectious disease, compared to the more hunter-gather ancestors who primarily hunted and did not eat grain.

Keep in mind that we are not just talking about corn-on-the-cob (sweet corn) here… we are also talking about corn cereals, corn chips, and other modern corn-based foods that are promoted by food companies as “healthy”.

There are several reasons researchers give for the nutritional problems and the weight gain caused by a corn-dominated diet:

* Corn contains lots of sugar, which raises insulin levels, causes you to be hungrier and causes your body to store calories as fat. Don’t be mistaken, just because corn does not taste obviously sweet, doesn’t mean it isn’t full of sugars. Once eaten, your body quickly turns corn products into sugar.  Even the starches in corn products can be broken down quickly by your body spiking your blood sugar levels, and causing cravings for more carbohydrate-based foods.

* Corn contains a high amount of phytate, a chemical that binds to iron and inhibits its absorption by the body. So, consequently, a diet high in phytate can make people more likely to have iron-deficiency anemia and fatigue. Phytate is also a nutrient blocker and inhibits other vitamins and minerals from being utilized.

* Corn is a poor source of certain minerals such as calcium and some vitamins such as niacin (B3). Deficiencies of niacin can result in a condition known as Pellagra, which is common in civilizations that eat a lot of corn. It can cause a variety of symptoms such as dermatitis, diarrhea, and depression. Since we are now a nation of corn-eaters, it wouldn’t be surprising that this is more common here than we realize.

It’s not just people who eat too much corn.

A large amount of the nation’s corn crop ends up feeding commercially raised cattle, which are cheaply fattened on corn and other grains before slaughter. Beef from corn-fattened cattle also has much higher ratios of inflammatory omega-6 fatty acids than healthier grass fed beef. Most meat in supermarkets comes from grain-fed animals.

Because corn and other grains are an unnatural diet and difficult to digest, cattle raised on corn develop higher stomach acidity, which is a breeding ground for the dangerous E. coli O157:H7, the deadly strain of the bacteria.

While eliminating refined grains such as corn and wheat (yes, it seems they are in everything!) can seem a very daunting task, the reward is a return to wonderful health, sparkling eyes, clear skin, clear thinking, weight loss as the body is once again able to extract appropriate nutrients from food, and a resolution of nutritional deficiencies from the lack of absorption.

Once you commit to eating a diet of whole and natural foods, you will begin to eliminate a large amount of these grains.

Although many grocery stores, health foods stores, and online companies are now offering a wide selection of wheat-free/gluten-free foods including breads, bagels, cookies, cake mixes, doughnuts, etc; it is best to avoid these as much as possible. While they are made without wheat, they still contain other refined and process grains and wheat substitutes such as tapioca flour and corn flour.

Best thing to do is avoid grains–especially wheat and corn–all together. Substituting another processed grain may bring about a small improvement, but not the drastic improvement necessary.

Try two weeks with no grain products. I guarantee you will see some drastic improvements in your weight and general outlook!