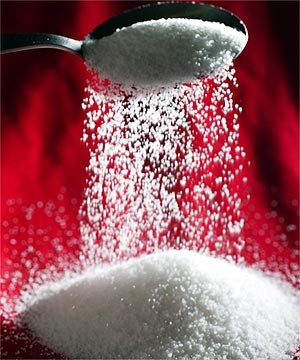 Our craving for sweets often ruins the most well intentioned lean body plan, and we succumb to chocolates, handfuls of cookies, a slice of cake, a generous scoop of ice cream, or other such decadent fare. The key ingredient in all of these items and essentially most of the sweets available on the market is sugar or worse, high fructose corn syrup.

Too much sugar is often the culprit in sabotaging our diets, but it seems hard to avoid or resist. Sometimes you just crave a little something sweet. Artificial sweeteners are loaded into so many foods and snacks promoted as “diet” foods, but the long-term negative health aspects, as well as the potential weight gain is good reason
for you to avoid any and all artificial sweeteners.

Fortunately there are a variety of natural sweeteners that have been quite common in supermarkets for a very long time, and are likely sitting on your shelf in your pantry at this very moment.

Different types of honey contain different nutrients and health benefits, depending on types of pollen and flowers the honey comes from. All honey possesses antibacterial agents and act as an antioxidant. Honey contains vitamins B2 and B6, and is a good source of iron. Consuming just a spoonful of honey each day can raise the antioxidant levels in our bodies, and it is also the healthiest natural sweetener available for those with Type 2 Diabetes. Raw honey can often be found at Whole Foods, local farm stands, and even some grocery stores, and is by far the best you can get—and chock full of enzymes, as well as the above listed nutrients.

Honey is a great replacement for sugar in many recipes, and because it is quite a bit sweeter, you can use a smaller amount. The rule of thumb is about a 1/2-cup of honey per cup of sugar. Also when cooking, you should also reduce liquids in the recipe by a 1/4 cup to ensure proper consistency. Honey also serves to brown foods more easily as they cook, so cooking temperatures should be lowered by 25°F.

Maple syrup is another product many of us have in the home and another natural sweetener that can often be used in place of sugar. We are talking about real, pure, natural maple syrup—not Aunt Jemima (which is just flavored corn syrup)! Real maple syrup is a good source of minerals and trace nutrients. As with honey, maple syrup is also a useful antioxidant, and possesses a good amount of zinc, which can help prevent atherosclerosis and lower cholesterol, as well as strengthen the immune system.

Maple syrup can be purchased in three specific colors or grades, each denoting a particular flavor. The lighter syrups (grade A) will possess a more subtle flavor, while the darkest coloring (grade B or C) yields the strongest, sweetest flavor. The darker maple syrups typically contain higher antioxidant and nutrient levels than Grade A maple syrup.

As with honey, you need to be aware of the high caloric level of maple syrup as it is still a concentrated source of sugar, but it is definitely a better choice than refined sugar. My personal preference is to use just a tiny pour of real maple syrup in my coffee instead of white sugar. For teas, I prefer to use a small dab of raw honey instead of refined sugar. Maple syrup is also great on oatmeal too.

Even though honey and maple syrup are slightly healthier options compared to refined white sugar, your best bet is to still reduce your dependence on added sweeteners to food and drinks by learning to adjust your taste buds to prefer less sweetness. As a matter of fact, I’ve trained my taste buds over the years to prefer the taste of unsweetened iced tea these days compared to years ago when I absolutely needed some added sweetener. Same with coffee – although I still occasionally use a small dab of real maple syrup in my coffee, I’ve adapted my taste buds to be able to enjoy a plain black coffee as well.

Blackstrap molasses is another option for a natural sweetener that can be used in baking. It is a particular type of molasses that is rich in several essential vitamins and minerals, including a good concentration of manganese, iron, calcium, potassium, and more. It is also substantially lower in calories than other natural sweeteners. Because molasses has a such a distinctive flavor, it may not be used as often as other natural sweeteners as a replacement for sugar, but it can impart some foods with unique flavors, such as baked beans and gingerbread.

A natural sweetener option that is calorie-free

Newer low or no-calorie sweeteners are just coming out. The healthiest of these is stevia. Stevia comes from the leaves of a shrub native to Paraguay and Brazil, stevia has been used as a sweetener for many years in South America. Stevia is about three hundred times sweeter than sugar, and has all the benefits of a sweetener without being bad for you or fattening. It’s truly natural, not some chemical compound from a laboratory, free of calories, doesn’t promote tooth decay, and won’t elevate blood sugar levels, or cause weight gain.

To sugar-crazy, and diet conscious Americans, stevia should be incredibly popular and well known, but up until recently, it was not allowed in food or easily found. The Food and Drug Administration (FDA) banned stevia in 1991. Why? Like many proponents of stevia, the sugar industry has a hand in the FDA’s strict stance. The FDA ban allowed it to be sold as a dietary ‘supplement’, and it can be found in most health food stores in the supplement aisle, right next to the vitamins. Most of the time, it is pretty difficult to find and never in the sugar or sweetener aisle…until now.

In the many years that stevia has been used in South America, and Japan, no ill health effects have ever been attributed to its use.

Just this year, US-based beverage giants PepsiCo and Coca-Cola reported they were looking to switch from (or at least offer customers the choice) Splenda for a sweetener they have more invested in: Rebaudiosides A (Reb-A), developed from stevia. The actual name of the plant is stevia. The stevia plant also contains the sweeteners Reb-A, B, C, D and E; dulcoside A; and steviolbioside. “We’re testing stevia and Reb-A in a variety of products, but it absolutely comes down to taste,” said Joe Tripodi, chief marketing officer for Coca-Cola.

Like all the previous low-calorie sweeteners out there, there have been some conflicting stories on the health benefits and safety of stevia but it has been approved by the FDA as a general-purpose sweetener since December 2008.

In 2005, Coca-Cola and the food giant Cargill began to work on their own form of the sweetener. The companies are now marketing their stevia sweetener as Truvia. You may see food items now sweetened with Truvia. Coca-Cola is initially using Truvia in two of its Odwalla juice drinks and in the new Sprite Green.

PepsiCo’s stevia sweetener is being marketed as PureVia, and like Truvia, the marketing is pushing the fact that it is natural. “This is a potential game-changer among zero-calorie sweeteners,” said Lou Imbrogno, PepsiCo’s senior vice president of Pepsi Worldwide Technical Operations, at a press conference in July 2008. PepsiCo’s partner is using stevia in its Sobe Lifewater drinks and in a new line of Tropicana orange juice, Trop50.

Stevia is the standout sweetener in the marketplace, because it is what the public is looking for in a low-calorie sweetener to replace the questionable and not-so-natural Splenda and NutraSweet chemical artificial sweeteners.

Stevia’s sweetness comes from its leaves. The stevia leaves are milled, and a freshwater brewing method is used to extract the sweetness. This extract is then purified further until a very high purity Reb-A is obtained.

Splenda’s creater, McNeil Nutritionals is getting in on the stevia craze as well. In March, Sun Crystals All-Natural Sweetener was launched, which combines stevia with pure cane sugar. This will be marketed as being as natural as sugar with half the calories. NutraSweet has reported that they were not worried about stevia.

But coincidentally, the company is working on its own NutraSweet Natural made with stevia! At least now they can compete head-to-head with stevia in the market. While the previous chemically-processed artificial sweeteners have been connected to lung tumors, breast tumors, and other rare types of tumors; several forms of leukemia, and chronic respiratory disease in several rodent studies, as well as rashes, headaches, and other serious and nasty side effects, stevia, Reb-A and its derivatives seem to be the safest of all low-calorie sweeteners for the moment.

You can find stevia blends for your own use at this site: Naturally Stevia

Try Stevia in your favorite beverages like coffee, tea, lemonade, and more. Depending on the brand and type of Stevia you use, the taste may vary. Some of the health food store varieties had a “green” aftertaste, but really not bad—just something to get used to. Now that Stevia is becoming more mainstream, the taste has improved. And some Stevia comes in liquid form with great flavors like vanilla, toffee, lemon, etc. Give it a try!