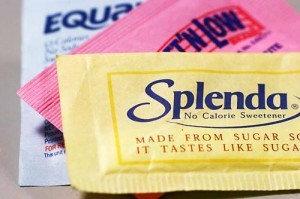 Are you using diet sweeteners in hopes that they will help you lose weight?

Guess what? Your diet sweeteners may be making you gain weight.

Yes, I hate to break it to you, but diet sweeteners can actually make you gain weight, because they trick your body and don’t give it what it wants.

According to researchers, there is no actual evidence that sugar substitutes help people lose weight. In fact, artificial sweeteners actually stimulate your appetite by causing an insulin response. Unfortunately whenever your insulin responds, it causes fat storing and the resulting drop in blood sugar. When the blood sugar drops, you get hungry.

Anyone who really cares about their health should stay away from the highly toxic artificial sweeteners– aspartame (NutraSweet), sucralose (Splenda),
saccharin (Sweet-n-Low), and acesulfame-k (Sunette).

Artificial sweeteners are actually nasty chemical concoctions that should never be put in our bodies. They are the opposite of Fat Burning, they are Fat Storing!

Just how do artificial sweeteners fool the body?

Aspartame or Nutra Sweet, for example, doesn’t have any calories, but it contain an amino acid phenylalanine, that blocks production of serotonin, a natural brain chemical that, among other things, controls food cravings and helps your mood.

A shortage of serotonin in the brain will make your brain and body crave the foods that will help to create more of this brain chemical, but unfortunately those usually are sweet, starchy, high-calorie, high carb snacks that you should be avoiding if you are trying to lose weight.

The more aspartame you eat or drink, the more you crave high carb/high sugar foods.

This is one of the not-so-well-known reasons why diets get derailed by excessive cravings.

And guess what? Artificial sweeteners also create an insulin response even though the blood sugar does not go up. And when insulin is released it is a signal for your body to store calories as fat. And the end result is you get hungry as well.

Artificial sweeteners are NOT diet food and will NOT help a diet.

Saccharin was the first artificial sweetener on the market. Saccharin has no calories and is hundreds of times sweeter than sugar. You may recognize Saccharin as that little ‘pink package’ called Sweet n Low.

Saccharin has been around for many years and has a lot of faithful followers, but it is not without a bad side.

Do you know how saccharin was discovered? Way back in 1879, a chemist discovered this sweetener (also known as benzoic sulfinide or E954) when he was researching coal tar derivatives. Sound yummy?

This guy was not trying to discover a new low calorie sweetener –or even any kind of food product at all. It was purely by accident that he discovered his new product tasted sweet.

In 1977, saccharin was accused of causing bladder cancer, after a study connected it to bladder tumors in mice. The US National Toxicology Program then put saccharin on its cancer causing list—officially declaring it a human carcinogen.

[A little side note here…when I was in college, my roommate drank low calorie soda constantly. Full of saccharin. Lo and behold, a few years later, she did come down with bladder cancer. So yes, I do believe there is a connection.]

Some of the side effects of using saccharin include:
* Itching
* Hives
* Eczema
* Nausea
* Headaches
* Diarrhea
* Excessive urination
* Wheezing
* Tongue blisters

Aspartame (marketed as NutraSweet) has been on the market for over twenty years, and although there are many health concerns with this artificial sweetener, it is still going strong.

Many people suffer from a lot of unpleasant health issues from aspartame, although they may not realize the connection.

Besides the immediate reactions that many people have from aspartame, there is also long-term damage that can occur from the excitatory (nervous system stimulating) amino acids contained in aspartame: phenylalanine, methanol, and DKP.

Adverse reactions and side effects of aspartame include:

Splenda is one of the more recent sweeteners on the market, but it too seems unsafe to use as a low-calorie sweetener. Sucralose, incidentally, was discovered in the 1970s by researchers looking to create a new pesticide. It wasn’t until the scientist accidentally tasted his new “insecticide” that he learned it was sweet.

While Splenda claims to be ‘made from sugar,’ and ‘natural,’ it is not at all natural; it is a chemically created synthetic compound, modified by adding chlorine atoms to sugar.

Sound like something you want to be drinking or eating?

Splenda was rushed to the marketplace without any long-term studies done on it. Some people are actually allergic to sucralose, and the reactions can be everything from rashes, panic attacks, headaches, to intestinal cramping, diarrhea, muscle aches, and stomach pain. Allergic reactions may not show up the first time, but may suddenly appear after several exposures.

So what to use for a healthy sweetener, especially if you are trying to keep your blood sugar stable and burn fat?

There is a good alternative—Stevia. Stevia is relatively new as a sweetener, but has been around for years and years.

Stevia is made from a plant and is naturally derived sweetener. It has been used extensively in Japan since the 70’s and in South American with no adverse health effects. It is low calorie, low carbohydrate and does not stimulate blood sugar or insulin, making it ideal as a diet sweetener.

Now being marketed in the US as Truvia, Purevia or as Stevia it is one of the best choices for a sweetener.