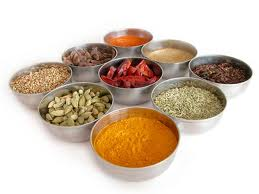 The rich yellow color of curry comes from a super-spice called Turmeric. Turmeric has been around forever and used in India and other countries for thousands of years as a yellow dye, for delicious spicy curry dishes, and traditional Indian Ayurvedic medicine.

But did you you know that turmeric has some of the world’s most powerful fat-burning and healing qualities of any food or spice?

It is not only a potent antioxidant, anti-inflammatory, and anti-bacterial substance but it also has other very powerful properties as well.

What is turmeric? Well, turmeric grows on a type of shrub in India and other parts of Asia. The roots are used for the turmeric and ground up to make the bright yellow powder.

The active ingredient in turmeric is something called curcumin and bright yellow part of the turmeric. This spice has medicinal properties as well as adding its pungent color and taste to many delicious dishes.

Traditional Indian medicine has used this spice as an internal cleanser, as an digestive aid, and in treatments for fevers, infections, liver and gall bladder problems as well as arthritis.

It also has fat burning properties, and has been scientifically proven to be effective for heart disease, and Alzheimer’s. In fact, Indians and Asians who eat lots of this spice in their diet are known to have some of the lowest rates of Alzheimer’s and dementia in the world.

Turmeric helps to stimulate the flow of bile in the gall bladder and helps to emulsify fats and so is very effective as both a digestive aid and fat-burning compound.

Turmeric also contains strong anti-platelet substances which help prevent the blood from clotting too easily, and so is very helpful to prevent against heart attacks and strokes.

In addition, homocysteine, a chemical component which signals inflammation in the body, and is one of the primary predictors of heart attacks, is significantly lowered in the presence of curcumin. The curcumin in turmeric also lowers and reduces the oxidation of plaque on the artery walls, making it a double edged sword against heart disease and ischemic strokes.

Turmeric is also often used as a treatment for all types of osteoarthritis, rheumatoid arthritis, and for joint pain, due to anti-inflammatory properties.

Turmeric also prevents and fights cancer as well. This super spice can actually prevent cancer tumors from growing, and in those who already have cancer, turmeric will slow down the growth and spread of cancer.

In a research study done with mice injected with cancer cells, the curcumin in turmeric was proven to be more than twice as effective as the cancer drug paclitaxel (Taxol). And with far less negative side effects!

When combined with the antioxidant quercetin (found in red onions, apples and cherries) the curcumin in turmeric is also highly effective against pre-cancerous polyps in the colon. These polyps were actually reduced by 50-60%.

One of the most exciting new studies has shown turmeric’s value against Alzheimer’s. Studies of the Indian population who have a high intake of turmeric in their curry dishes show a very low incidence of Alzheimer’s and dementia in the elderly.

This is thought to be due to the fact that Alzheimer’s victims have a buildup of a certain type of plaque in the brain and turmeric is highly effective at breaking down this plaque and protecting brain health.

How to eat more Turmeric:

Yes, turmeric does exist in the prepared ‘curry’ spice, but the best way to get the highest concentrations of curcumin is to use the spice turmeric instead of curry. Curry is a combination of several spices in varying amounts, and it is hard to tell how much turmeric is in the curry powder you buy.

Turmeric is very deep yellow and can stain skin and clothing so be careful when using it. Although this spice tastes great in curries, it is much more versatile than that. Turmeric is often the yellow color in regular mustard, so if you are not a fan of curry, you can get this awesome spice by eating lots of mustard too.

It is delicious on sautéed apples, or steamed or baked cauliflower, green beans and onions, or any of your favorite veggies.

For a great, low-calorie dip, try mixing turmeric and dried onion with a little omega 3-rich mayonnaise, salt and pepper. Try it with raw veggies like cauliflower or broccoli, celery, sweet pepper, jicama or radishes.

Turmeric is also a great spice to add to dishes that feature lentils. Give salad dressings an appetizing orange-yellow hue and a little extra flavor by throwing some turmeric powder to them.

Once you start using turmeric on a regular basis, it’s fun to find new ways to use it in recipes. My favorite way to use it is to add a pinch of it to egg salad or adding to scrambled eggs or veggie omelets.

It adds a great flavor, and gives the eggs a yummy rich yellow hue.

Turmeric can also be purchased in capsules from a health food store, or you can make your own if you want to buy gelatin capsules and fill your own. The freshest, most powerful turmeric is available in bulk in natural food stores and is usuually less expensive and most potent.

If you are pregnant or nursing, check with your physician before using it; it can be a uterine stimulant. And if you have a tendency to get gallstones or bile obstructions; or have congestive heart failure, best to avoid. Because turmeric is so powerful, check with your doctor if you are taking any prescription drugs as it may interfere with the medication or the treatment.