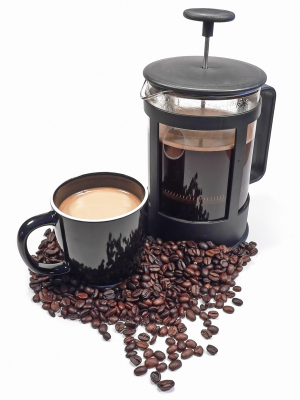 Caffeine was once thought to be bad for us.

But as we can see with the prevalence of coffee shops on virtually every corner, coffee is everywhere. And tea is gaining in popularity too.

According to recent coffee statistics, coffee is the most popular beverage worldwide with over 400 billion cups consumed each year.

And, the United States alone imports around $4 billion worth of coffee per year.  Americans drink about 400 million cups of java a day, and companies like Starbucks would certainly like that number to grow.

Coffee, tea and other beverages containing caffeine have a great many health benefits.

Coffee increases the body’s metabolism, your heart rate, breathing, and helps to warm up the body.

It elevates the mood and can actually reduce depression as well, by increasing energy and stimulating the brain, making you more mentally alert.

Beyond the obvious stimulating factors that we all enjoy coffee for, there are some other fairly significant health contributions coffee makes. Lets take a look at some of these redeeming virtues of coffee:

·    Coffee Lowers Your Risk of Type 2 Diabetes—Two separate studies, published in the Journal of the American Medical Association (JAMA) found that drinking three to four cups of coffee a day decreased risk of type 2 diabetes by 27%. It is thought that this is due to the fact that coffee contains antioxidants and minerals like magnesium, that are beneficial for blood sugar metabolism and insulin sensitivity. Coffee may also help with weight reduction, which lessens the tendency to get diabetes as well.

·    Coffee Prevents Parkinson’s disease—Six studies have shown that people who drink coffee daily are up to 80% less likely to develop Parkinson’s. And some of the newer Parkinson’s drugs actually contain a caffeine derivative.

·    Coffee Reduces Colon Cancer Risk—While colorectal cancer is the second highest cause of cancer related deaths in the US, a recent study from the European Journal of Cancer Prevention showed that colorectal cancer was 24% lower among those who drank 4 or more cups of coffee per day than the non-coffee drinkers.

·    Coffee Helps Asthmatics—Caffeine and the chemical theophyline in coffee act as natural bronchodilators. Three or more cups of coffee per day help can relieve the symptoms of asthma.

·    Coffee Alleviates Headaches and Manages Migraines—Because caffeine is a natural vasoconstrictor, the caffeine in coffee helps to reduce headache pain in many people. Caffeine additives not only help headache medications to work more effectively, it also helps the body absorb headache drugs quicker.

·    Coffee Burns Fat—Because caffeine speeds up your metabolism, you have more energy and burn more calories. Caffeine also breaks down fat and frees up fatty acids in the body for immediate fat burning. In fact, conversion from fat to energy is about 30% more effective with caffeine. And because fat is being burned for energy, blood glucose levels don’t get low, and amino acids are preserved and you don’t get hungry as quickly.

·    Coffee’s High Number of Antioxidants Fights Free Radicals–Recent studies have shown that coffee is one of the richest sources of antioxidants in the average person’s diet. But little is known about how these antioxidants, including caffeine, work against free radicals.

·    Coffee is an Athletic Performance Enhancer—Numerous tests have been conducted on caffeine and its effects on athletic performance and endurance. And the results–caffeine works. About 330 mg (or 5 mg per kilogram of body weight) 30 minutes to an hour before workouts results in better endurance, faster times, less exertion, less fatigue, and more rapid recovery — up to 30% better.

Coffee can raise cholesterol, spike insulin, be dangerous to those with heart disease, cause irregular heartbeat, raise blood pressure, cause insomnia and anxiety if overdone.

People with panic or anxiety disorders may find that they are especially sensitive to caffeine and usually find that even a little bit of coffee will make anxiety and panic much much worse.

Coffee also interferes with your body’s ability to use folate (a B vitamin, especially important for pregnant women), and vitamins B12 and B6. These nutrients are necessary to keep homocysteine levels low. Elevated homocysteine levels are associated with heart attacks and heart disease.

Coffee makes the acid/base balance of the blood turn acidic, causing calcium to be used as a buffering agent in the body.

Coffee also stimulates your adrenals — the hormones that activate your fight or flight response. If your adrenal hormones are stimulated too often, which is bound to happen if you are a daily coffee drinker, your adrenal glands may eventually burn out.

In premenopausal women, the body will substitute progesterone for adrenal hormones.

Coffee tends to be a heavily sprayed crop so drinking non-organic coffee will expose you to a hefty dose of pesticides with each cup.

If you’re pregnant or planning to be, you should avoid coffee altogether. Over 300 mg of caffeine a day, which is the equivalent of two to three eight ounce cups of coffee, can increase your risk of miscarriage, low birth weight baby, and cleft palate, as well as SIDS. It is also transferred through breast milk, and stays in your body and your baby’s body  longer than most people.

Caffeine and coffee can also be pretty strong diuretics, so if you are drinking large quantities of it, be sure to drink water to replace the lost fluids.

So am I going ditch the ‘Joe’?

No way! I love a nice strong cup in the morning to get me going, mentally and physically. It’s sometimes the only thing that gets me out of bed. I’m not a morning person, without caffeine.

If you want to drink coffee, keep this in mind, and you’ll be fine:

·    Opt for organic, drink it fresh and grind it every day. Coffee is one of the products that you just should not ingest any other way, so pay a few extra bucks and get the organic kind. This maximizes the antioxidants in the coffee—and it just tastes better. And while you’re at it, avoid drinking coffee out of those nasty Styrofoam containers. Coffee can leach out some bad chemicals from that stuff.

·    Drink it black. Leave out the sugar, the cream, the fake non dairy chemical ‘cream’, and the artificial sweeteners. If you MUST have something in your coffee, try a little coconut milk and stevia.

·    Avoid drinking caffeinated coffee in the evening. Since coffee has a half life of 6 hours, it can take quite a bit of time to clear out all the caffeine. Instead get a good night’s sleep and sleep soundly, without caffeine.

And whatever you do, don’t get your caffeine fix from those fluffy, fattening, sugary, macchiato, mochaccino, cappucino, frappuccino drinks from the coffee shops. That’s not going to do you or your wallet any good.

A small amount of caffeine can be very helpful in many instances. A long boring drive when you’re feeling sleepy, crying babies who keep you up half the night, traveling through timezones, and getting up early to be productive in the pre-dawn hours of the morning. Sure, it’s good to be health conscious, but a little bit of caffeine to get us up in the morning, through the day, and over the hump is OK, too. And sometimes, a hot cuppa ‘joe’ just really tastes good.

Till next time, stay healthy, lean and energetic!